Can Bitcoin Break 50K This Week? 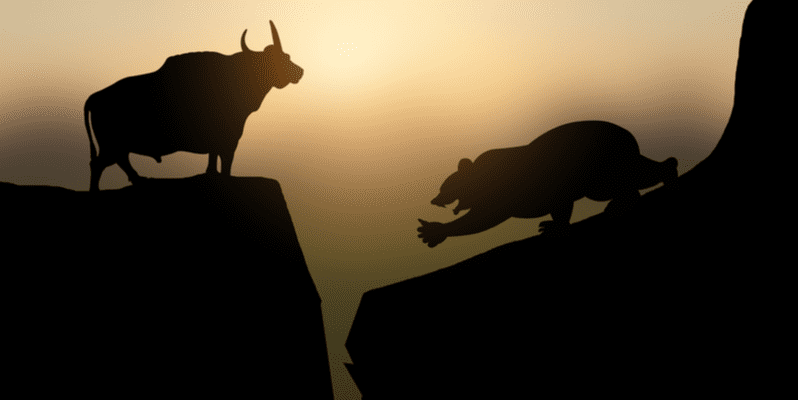 Bitcoin had a boring weekend, with the price ranging between about $47,500 and $49,000. Can bitcoin break above $50,000 again this week, or is there the potential for more downside? 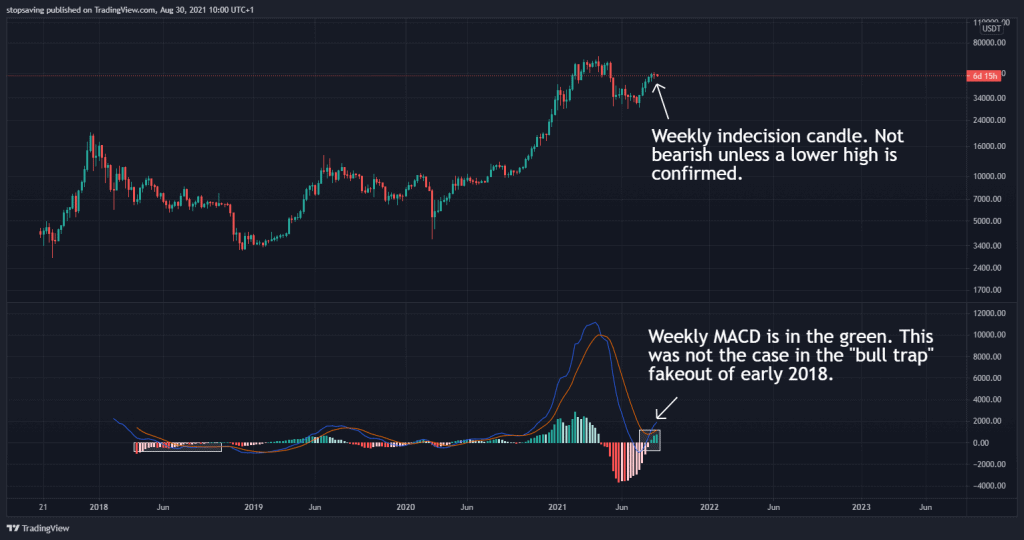 We will start off with the weekly candle chart for bitcoin. We can see that last week bitcoin printed its first non-green weekly candle. Instead, bitcoin closed the week with a red indecision candle.

While this does show indecision as bitcoin tries to break the $50,000 level, it is not necessarily bearish from a technical analysis standpoint.

However, if bitcoin is to close this week below last week’s low (currently at around $46,000), this would produce a “lower high” on the weekly chart. This would put bitcoin in a weekly downtrend.

That said, bitcoin has a long way to go until the end of this week. And for now, the weekly MACD indicator is in green territory, which means that the weekly price momentum is positive.

It is worth noting that we never saw the weekly MACD in the green after bitcoin’s 2017 peak and subsequent “bull trap” fakeout. So from this standpoint, the Bull run 2.0 scenario we have discussed seems plausible. 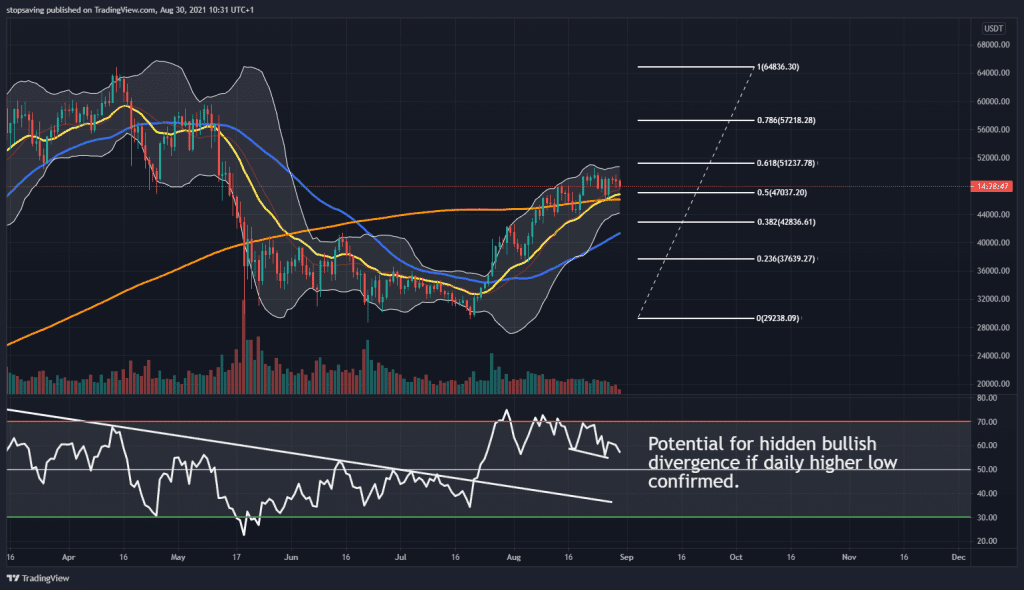 The daily chart looks similar to the daily chart from last Friday’s update. Bitcoin is still in an uptrend with higher highs and higher lows.

The bitcoin price is also still above the 21-day exponential (yellow line) and 200-simple (orange line), which both have positive slopes.

The 21-EMA is also getting further away from the 200 SMA, which shows continued strength for the bulls.

Notice how the 21-EMA has held as support throughout this entire run. Provided this holds on a daily closing basis, I see the current formation on bitcoin as consolidation before another leg higher – perhaps towards the 0.718 Fibonacci level at around $57,000 in September.

However, a daily closure below the 21 EMA (currently around $46,800) would set off alarm bells. This would also result in a lower high on the daily chart. From there, the 200-day SMA (just under $46,000) would have to hold. If not, the 50-day SMA (blue line) becomes the next downside target. This line is currently at about $41,500 but is steadily rising over time.

If bitcoin can close a daily candle above $49,500, we would have hidden bullish divergence on the RSI. Here, bitcoin would be making a higher low while the RSI makes a lower low. In other words, bears are running out of strength relative to the bulls as they are unable to push the price down.

Until then, bitcoin is trading in a range. It is building up for a large move in my opinion as the Bollinger bands are getting narrower. So, now is the time to be paying attention! 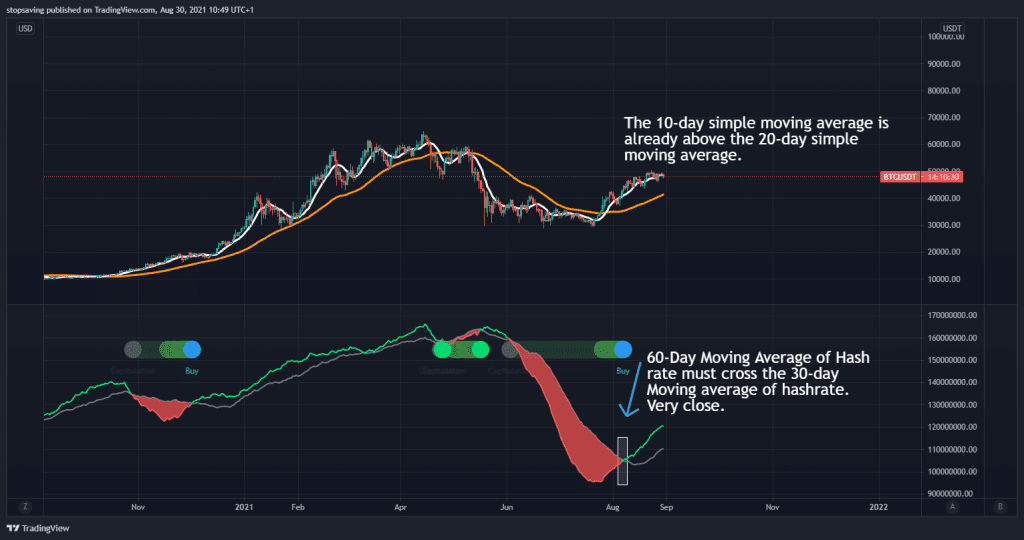 The Bitcoin Hash Ribbons indicator flashed a blue “buy signal” at the start of the month.

The next chart shows the bitcoin hash rate is still increasing. So from this standpoint, bitcoin looks healthy from a fundamental perspective. This does add another point for the bulls. 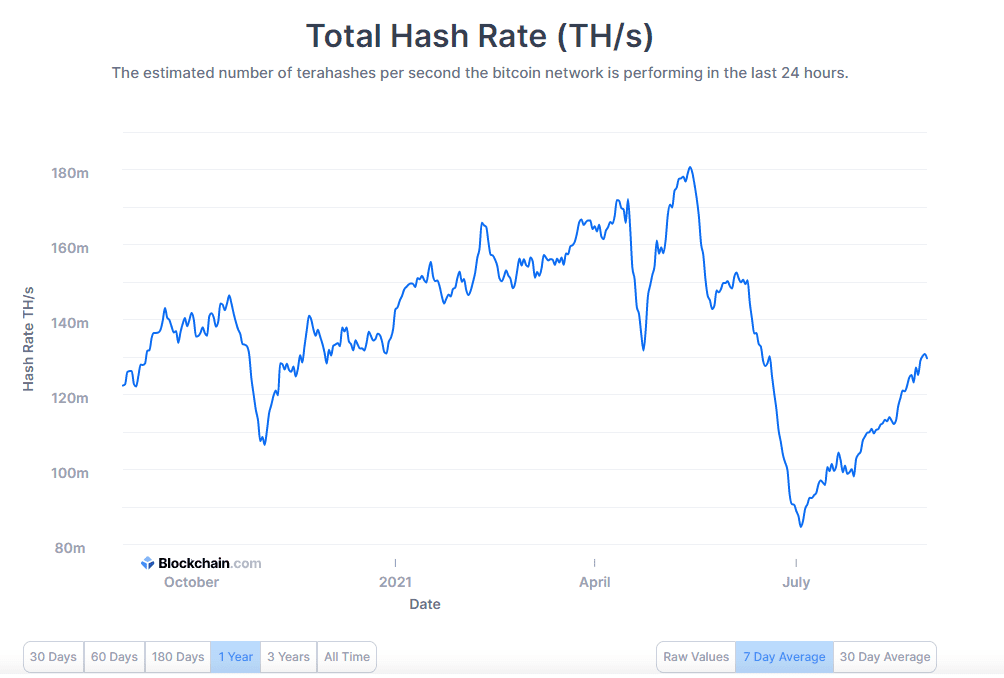 The bitcoin hash rate has been steadily rising with the bitcoin price. 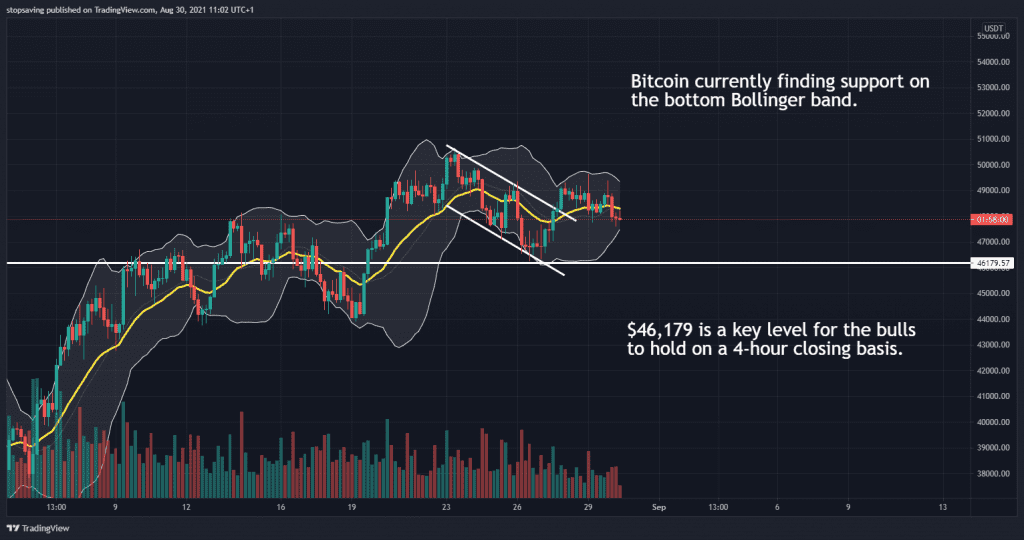 Over the weekend, bitcoin did break out of the 4-hour downward channel we identified last Friday. However, the usual weekend price shenanigans took place and the price has since moved back down below the initial breakout level.

With that said, the price is currently slowing down around the bottom Bollinger band, which is contracting. In other words, volatility is decreasing as the price tries to go lower. Given the market is in an overall uptrend, this shows the bears are battling to push the price down at the moment.

Provided bitcoin can continue to close 4-hour candles above the last low at around $46,000, there is not much for the bulls to worry about.

The altcoin market is currently showing overall strength in comparison to bitcoin. 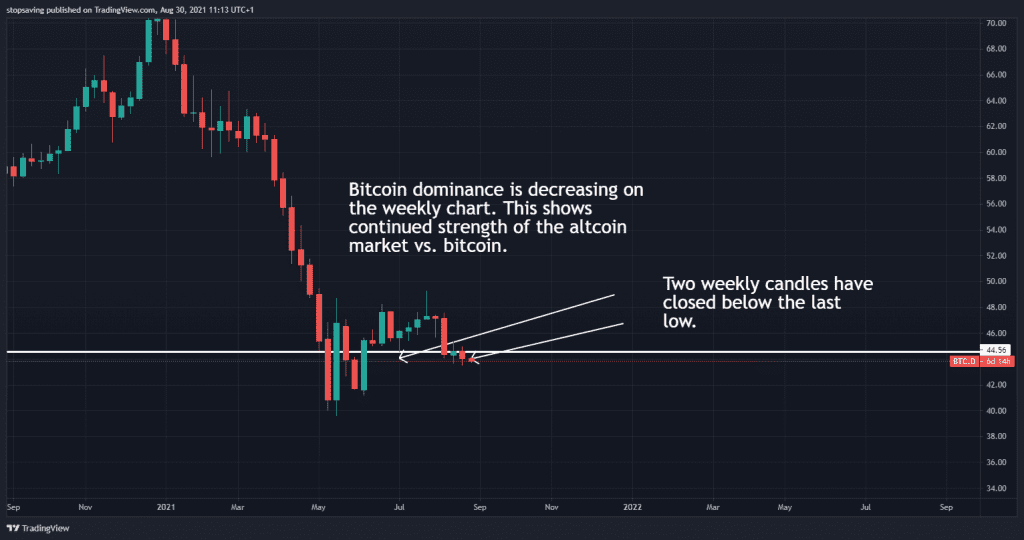 We can see that bitcoin dominance continues to fall, with two weekly candles closing below the last low. Assuming bitcoin can hold the line, altcoins could show continued relative strength. However, if bitcoin breaks down, (most) altcoins are likely to fall much harder!

This becomes clearer when we compare the monthly chart of the total market cap excluding bitcoin with the bitcoin chart: 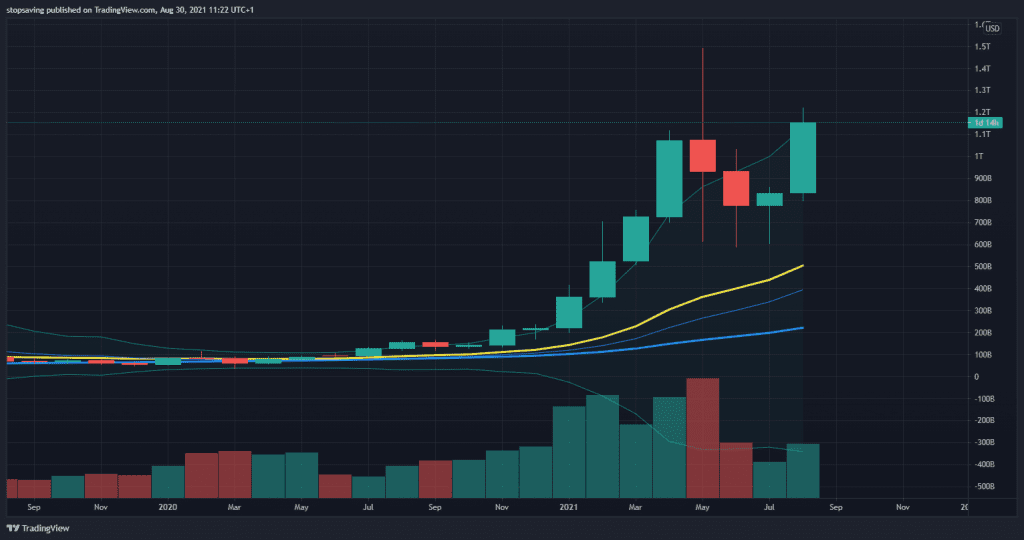 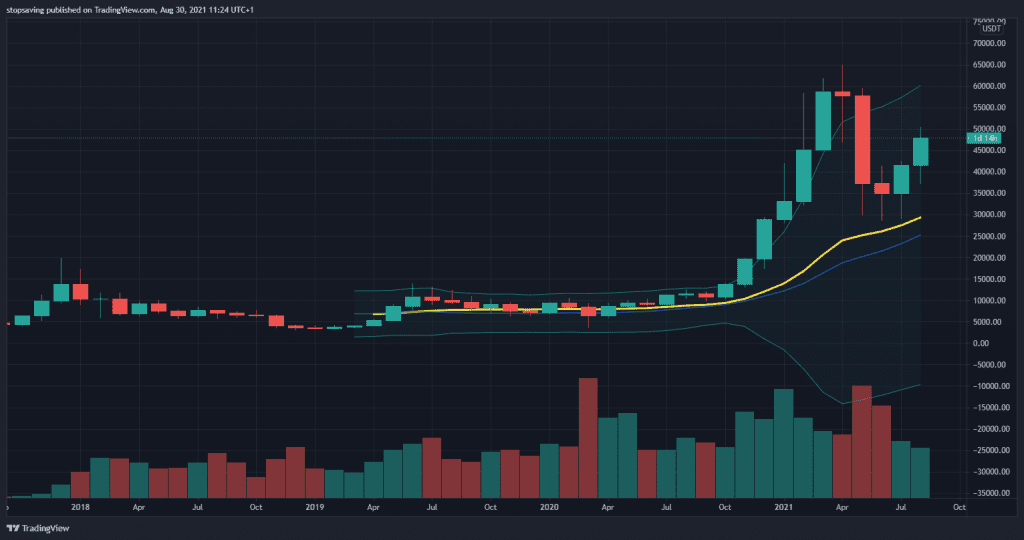 The altcoin chart is extremely close to making higher highs at the end of this month, whereas bitcoin has some way to go. Nevertheless, bitcoin is on the verge of closing two green months in a row. This never happened after the 2018 crash.

Although bitcoin is stalling right now, it would be unwise to get bearish until things actually turn around. In my opinion, that would occur if bitcoin closes a daily candle below $46,000.

For now, the crypto market still looks healthy. Calling “the top” of an uptrend is never easy. And so far, the trend has been a good friend.