1
HOME Blog Uncategorized Ethereum’s Price Rally of 2021: What You Need to Know

Ethereum’s Price Rally of 2021: What You Need to Know 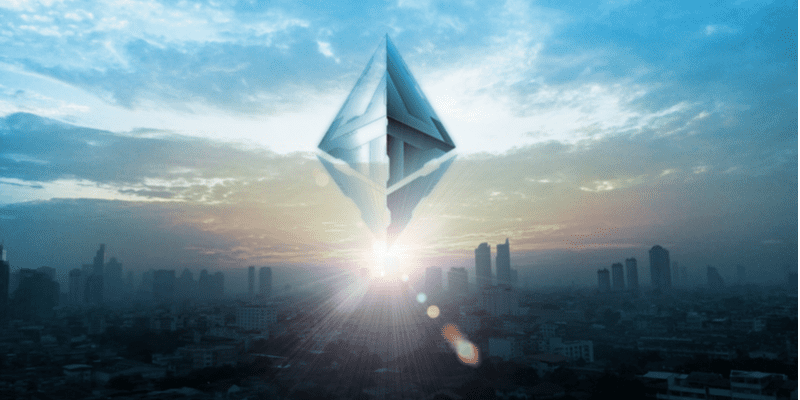 Ethereum has seen some exceptional price action lately. Why is this happening, and will the good times continue for holders of ether (ETH) tokens?

Before we get to the ETH price chart, let’s first dive deeper into what Ethereum actually is. This will provide us with more context on what is driving the Ethereum price rally.

In my mind, the best way to explain Ethereum is to compare it with Bitcoin.

Through the Bitcoin blockchain, anyone can send digital currency (bitcoin with a small ‘b’) from point A to point B. This can be done without the use of a financial middleman, such as a bank.

This is because the Bitcoin system (Bitcoin with a large ‘B’) is just a public record of who owns bitcoin at any point in time. This record is updated and secured roughly every ten minutes through the bitcoin mining process.

Like Bitcoin, Ethereum has its own blockchain that can record simple financial transactions.

These can be programmed to its blockchain in the form of smart contracts.

What are smart contracts?

Smart contracts are lines of code that developers can write on the Ethereum blockchain. They give a set of rules to decide the outcome of a transaction.

Once those rules are programmed to the blockchain, they are agreed upon by the Ethereum network. This means they can’t be changed.

Smart contracts are not needed for simple ether transactions. I could send ether from my Ethereum address to yours without one, just like I could send you bitcoin.

How were smart contracts used in the past?

In the crypto bubble of 2017, smart contracts were used very effectively for initial coin offerings (ICOs).

For example: when I invested in the OST ICO in 2017, this is what happened:

ICOs attracted billions of dollars in investment. At one point, ICOs were raking in more money than the entire venture capital industry for early-stage internet start-up companies.

Sadly, the ICO craze ended in tears during the last crypto bear market. But despite this fact, it proved that smart contracts could execute complex transactions on the blockchain.

Today, smart contracts are used a lot more than they were in 2017. And much more capital flows through them.

The lion’s share of this capital is attributed to the decentralised finance (DeFi) space.

DeFi is a growing movement to conduct all forms of complex finance on the blockchain. Here are some well-known examples:

Each of these applications is built on the Etheruem blockchain and runs entirely through smart contracts. In other words, they do not require any human intervention to execute transactions!

The above protocols each have their own tokens, which can interact on the Ethereum blockchain. There are thousands of different decentralized applications (dapps) built on Etheruem that do this in some way, shape, or form.

How are ether tokens used?

All Ethereum transactions have ‘gas’ fees, which get paid to Ethereum miners to record and validate each transaction. We can think of gas as the fuel that powers the Ethereum blockchain.

A complicated smart contract with many steps will have higher gas fees than a simple transaction with fewer steps.

So, what does this have to do with ETH tokens?

ETH is the currency of the Ethereum blockchain. And you need ETH to buy ‘gas’. Think of this as using your debit card to buy gas to fuel your car.

Without getting too technical, demand for gas goes up as more people use the Ethereum blockchain. Since gas is paid for in ETH, demand for ETH goes up too.

With that being said, gas units are actually just tiny bits of ETH. The only difference is that miners can separate the gas price from the market price of ETH. Therefore, the value of ETH is not directly related to the amount of network usage.

Like any currency, the price of ether is based on market forces of supply and demand, plus a healthy dose of trading speculation!

Ethereum is still the king of DeFi

Per DappRadars’ April 2021 Dapp Industry Overview Report, there was over $70 billion locked in DeFi smart contracts on the Ethereum blockchain at the end of Q1 2021. In simple terms, this means that around $70 billion worth of liquidity is being traded, lent, and borrowed through smart contracts on the Etheruem blockchain. All that trading and lending requires gas fees, hence the demand for ETH.

However, Binance smart chain (BSC) is hot on Ethereum’s heals with $40 billion locked and is growing faster than Ethereum right now. But will it catch up? Well, this depends.

Scores of DeFi investors have migrated from Ethereum to BSC because of the lower fees. BSC is a proof-of-stake blockchain (as opposed to proof-of-work like Ethereum), which means it doesn’t have miners. Instead, BSC has validators who “stake” (lock-up) Binance tokens (BNB) to secure the network.

With that said, Ethereum has been around longer than other competing blockchains, and is very well trusted by the crypto community for its security. It is also more decentralized than BSC. This is why, despite its high gas fees, Ethereum’s network use continues to grow.

Now, Ethereum is upgrading to Ethereum 2.0. This will use proof-of-stake instead of proof-of-work and will also include a ‘sharding feature’ that will allow 64 ether transactions to be processed simultaneously.

The upgrade will eventually make Ethereum cheaper, faster, and more secure. To become a validator, you need to deposit 32 ethers into a smart contract address. These would be frozen for some time. In return, you would earn an ether dividend every year based on the size of your stake.

So, if Ethereum 2.0 can compete with BSC and others in terms of fees and speed, then it is likely to stay in pole position in the race for DeFi domination.

As the second-largest cryptocurrency, Ethereum is more widely adopted by institutional investors than other smaller blockchains. It is easier for most institutions to trade or invest in ETH because there are more institutional-grade investment products available for this.

The Grayscale Ethereum Trust (ETHE), for example, already owns $11 billion of ether. This is about 2.5% of the entire current ETH supply. And like bitcoin, Ethereum futures now trade on the CME.

With a current market capitalisation of around $400 billion, Ethereum is now getting big enough for the big money to care.

Overall, the fundamentals of Ethereum look strong and suggest that it could continue to appreciate in value over the long term. Of course, there will be major corrections along the way!

And now, for the Ethereum price chart…

Fundamentals aside, the Ethereum price chart looks phenomenal against both its bitcoin and USD pairs.

Versus bitcoin, ETH has broken out of a 3-year falling channel. And versus USD, it is well in the region of price discovery.

Below are the respective charts of ETHBTC and ETHUSD. As a trader, these charts are hard to hate, even if you have no interest in Ethereum’s fundamentals. 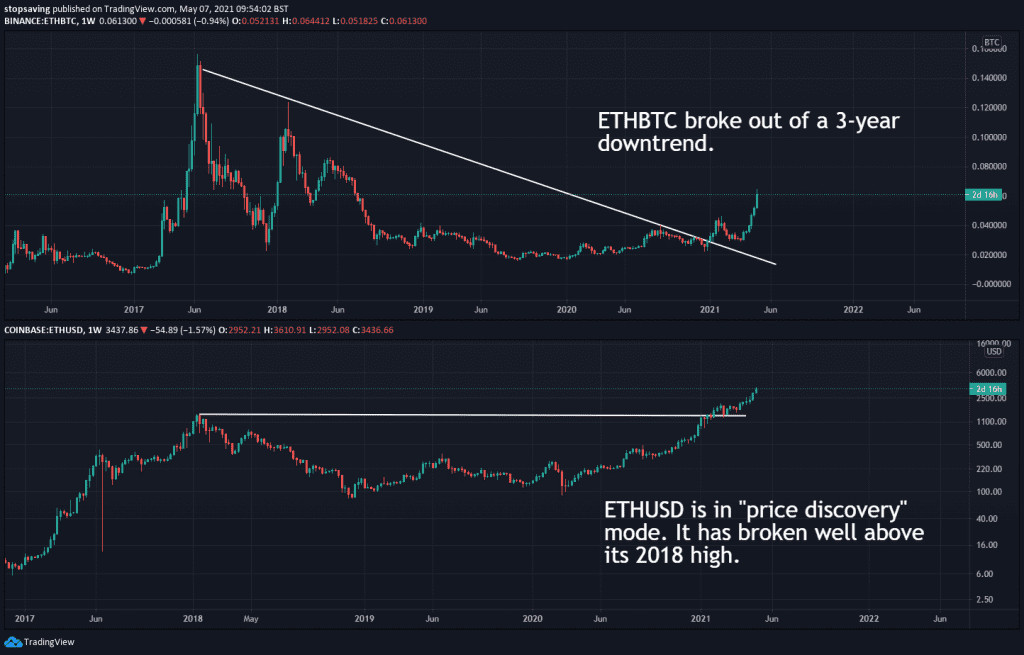 As I outlined in a recent crypto investment strategy post, Ethereum is currently my largest crypto holding. It may not offer more upside potential than other small-cap competitors. But in my opinion, it has a higher probability of standing the test of time. Much like bitcoin, Ethereum could now be too big to fail.

Disclaimer: As always, none of this is investment advice. I hold Uniswap, AAVE and SNX at the time of writing. I sold my OST tokens after seeing most of the ICO gains evaporate in the bear market of 2018. But I recently bought a small amount because the token looks cheap and the chart looks nice. We are in a bull market, after all.