What The NVT Ratio Says About The Bitcoin Price 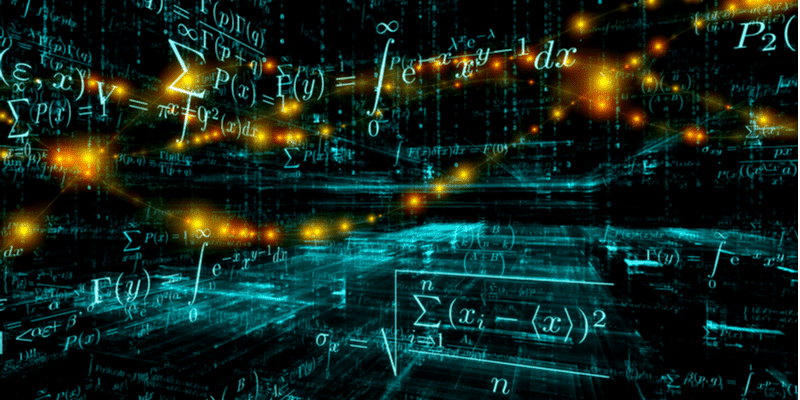 The NVT ratio (or Network Value to Transactions ratio) is the closest thing to a price-to-earnings ratio that you will find for bitcoin. In this article, we will learn about the NVT ratio and what it currently means for the bitcoin price.

Who came up with the bitcoin NVT ratio?

Willy Woo first introduced the NVT ratio in a tweet he put out in February 2017. Here, Woo stated that bitcoin was not currently in a bubble according to NVT. 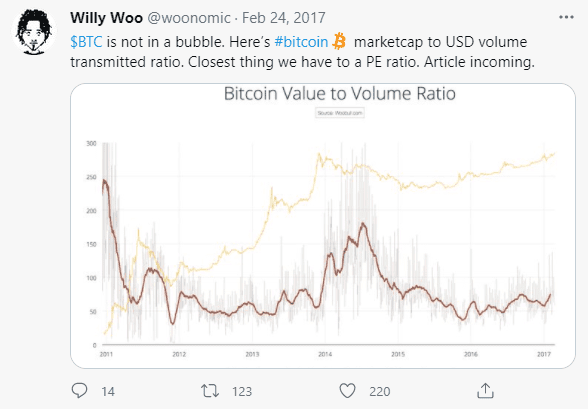 In late September 2017, Woo wrote an article in Forbes Magazine explaining the NVT model in more detail. In the article, Woo again confirmed that bitcoin was not yet in a bubble.

At the time of that article, bitcoin stood at $4,000 and would rise a further five-fold before it came crashing down. So again, Woo’s ratio was right on the money.

What is the price-to-earnings ratio?

As mentioned at the start of this post, the NVT ratio is a bit like the price-to-earnings ratio (PE ratio) used for valuing stocks.

The PE ratio can tell us if a stock is overvalued (expensive) or undervalued (cheap). It does this by dividing the price of a stock by the company earnings per share.

A high PE ratio can also indicate high growth potential, as investors think that earnings will catch up to price in the future.

But bitcoin is not a company. Therefore, it does not have any company earnings!

What would Bitcoin’s earnings be if it were a company?

Unlike the PE ratio (which uses earning per share in the denominator), the NVT ratio uses the daily bitcoin transaction volumes in US Dollars.

This is a proxy for the ‘earnings power’ of the Bitcoin network as it shows the amount of money flowing through the blockchain each day. Higher Bitcoin transaction volumes mean more people use Bitcoin. This makes Bitcoin more valuable as a payment system.

The chart below, taken from blockchain.com, shows Bitcoin’s daily transaction volumes (measured in USD dollars) since 2010. Notice how this has increased over time as 1) bitcoin’s price has increased and 2) more transactions flow through the Bitcoin blockchain.

The above chart is telling us that the ‘earnings power’ of the Bitcoin network is steadily rising over time!

Of course, the price of bitcoin has also gone up over this time, which is why the chart looks a lot like the long-term bitcoin price chart.

The daily transaction volume of Bitcoin varies each day. But if we take a 30-day average of the above numbers, we can see that over the last 30 days, on average nearly $7 billion of transactions flowed through the blockchain each day. 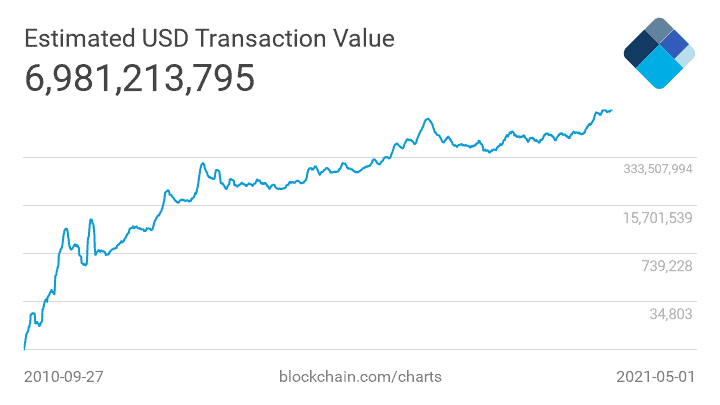 This suggests that if Bitcoin were a company (like Paypal), it would have very high earnings power right now.

As mentioned at the start of this post, NVT stands for ‘Network Value to Transactions.’ The NVT ratio is calculated by dividing the bitcoin network value (market capitalisation) by the daily bitcoin transaction volume:

On any given day in bitcoin’s history, we can get an NVT ratio using the above equation.

On Woo’s website, he charts the NVT ratio using a 14-day median. This is then compared to the bitcoin market capitalisation, as shown below: 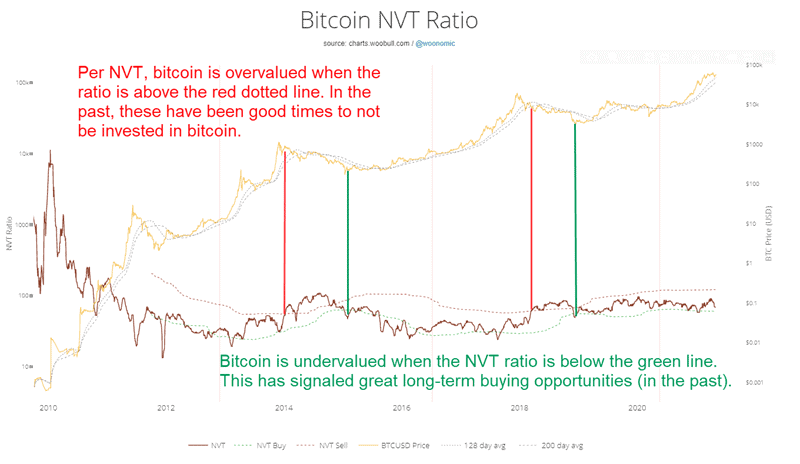 Per the NVT model, bitcoin is expensive when the ratio is above the red dotted line. In the past, these have been good times to not own bitcoin.

When the NVT ratio was below the green dotted line, bitcoin has been cheap. These have been great times to buy bitcoin.

What is the NVT ratio saying today?

We can see from the above chart that the NVT ratio is a lot closer to the green line than it is to the red one.

This suggests that bitcoin is currently not overvalued according to the NVT model.

In simple terms, this means that the current price of bitcoin is justified by the transaction volume flowing through the Bitcoin blockchain.

For the ratio to signal that bitcoin is in a bubble, one of two things needs to happen:

Which one of these happens first? My guess is the first one. But only time will tell!

Should you use the NVT ratio in your investment strategy?

The NVT ratio is a useful model for determining whether bitcoin is in a bull or bear market. But just like the PE ratio for stocks, it is better to use it as part of your analysis, rather than as the basis of it. For example, you could use the NVT model along with the stock to flow model to get a better read on bitcoin’s long-term health.

Just because something worked well in the past, does not guarantee it will work well in the future. This is true with any investment or trading strategy.

With that said, I do like the elegance of the NVT model. And it could add another dimension to your crypto research – especially if you are someone who only uses technical analysis to make trading or investment decisions.