1
HOME Blog Investing Quotes Are We in a Stock Market Bubble Right Now?

Are We in a Stock Market Bubble Right Now? 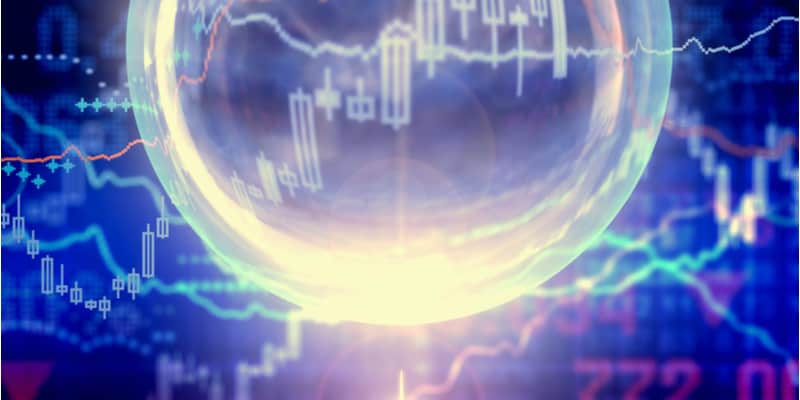 Are we in a stock market bubble? With the S&P 500 and the Nasdaq both hitting new all time highs recently, and the world economy slowing down as a result of governments forcing people and businesses into lockdown, this question will no doubt be on the minds of most investors right now.

What is a bubble?

A bubble is a time when asset prices rise way above their intrinsic values because investors are in a general state of euphoria. Bubbles usually ‘pop’ at the peak of this euphoria and then start to ‘deflate’.

The deflation of a bubble usually drives asset prices back down to where they were when the bubble began. Sometimes, it drives prices even further down than this as fear and panic rattle the nerves of investors.

Market cycles usually follow a similar pattern, often ending with a euphoric ‘blow off top’ when bubbles finally pop. We can see this pattern explained in the well known Psychology of a Market Cycle infographic below: 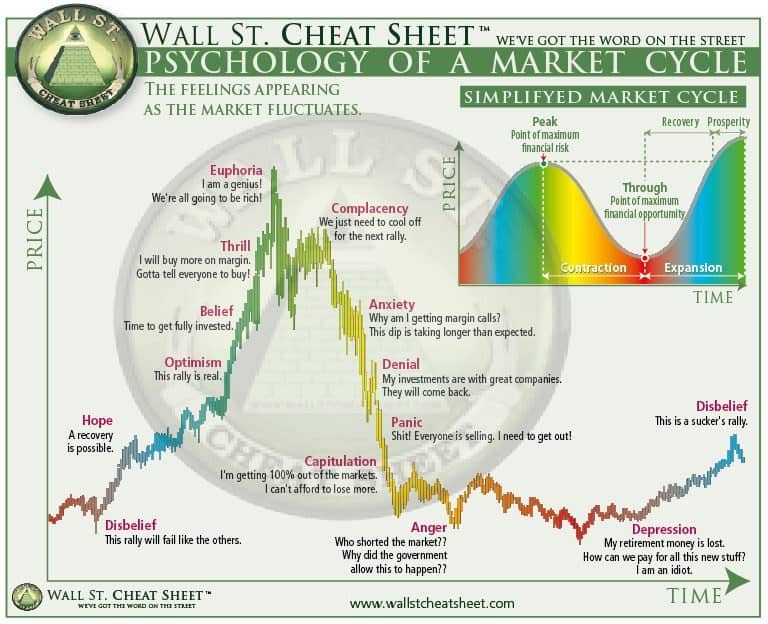 Asset markets usually follow the same cycle. They often end with euphoria at the peak of the bubble.

The above market cycle played out to a tee with two bubbles in recent history.

First, the dotcom bubble which popped in March 2000:

Second, the Bitcoin bubble which popped in December 2017:

Bitcoin’s market cycle of 2017 also ended with a blow off top.

To be in a bubble there is usually a reason why most investors feel overly optimistic about the market. In the dotcom boom any stock with a ‘.com’ at the end of its name was destined to become a billion dollar company. But the majority of these, like pets.com, were dismal failures.

In the blockchain / bitcoin bubble of 2017 the same thing happened with ICO’s and crypto tokens that were backed by nothing more than a White Paper. Blockchain was next new paradigm, and any company involved in it would become a roaring success.

In one well-known example of this, a company called Long Island Iced Tea had its shares rocket over 250% on 21 December 2017 after announcing that it would be changing its name to Long Blockchain.

In today’s market environment, many investors are optimistic because they believe the Federal Reserve will keep printing money. If this continues, there will be more money chasing the same amount of stocks.

Are we in an equity market bubble now?

Currently the S&P 500 has a CAPE ratio of around 30 based on average inflation-adjusted earnings from the previous 10 years. According to data from multipl.com, this is well above the average CAPE ratio since 1872 of around 16, but it is still below the dotcom level of about 44.

Other equity markets look much cheaper than the S&P, so its hard to say that these are in a bubble right now. For example, the FTSE 100 currently has a CAPE ratio of around 14 and Japan’s Nikkei is close to 19.

As per the chart below, we can see that the growth to value ratio is now higher for US equities than it was near the peak of the dotcom bubble. This ratio should revert back to the mean at some point—but its hard to say when. 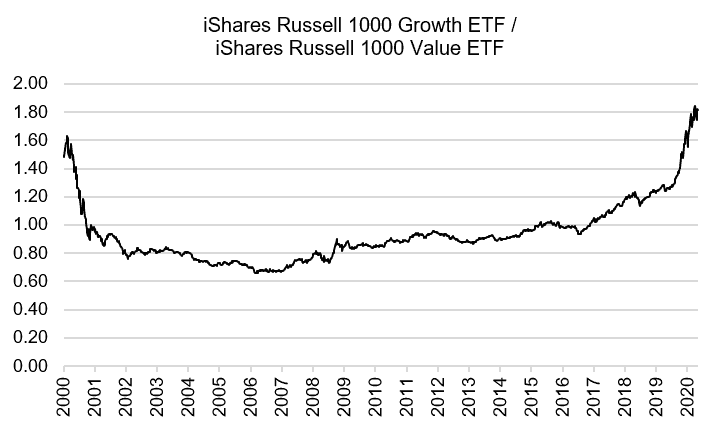 What if we are in a bubble?

If you ask me, this is a great quote to live by. Even if we are in a bubble, we have no idea how long it will go on for. And owning gold and bonds could help cushion the blow if stocks do come tumbling down.

Disclaimer: this is not investment advice. I own some US, Japan and UK stocks. I also own gold and bonds.