1
HOME Blog Optimising Risk And Return With The Sharpe Ratio

Optimising Risk And Return With The Sharpe Ratio 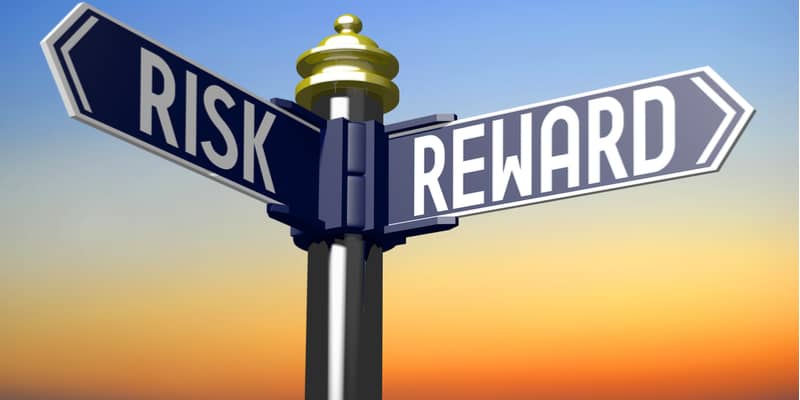 An unfortunate truth about investing is that we can’t earn decent investment returns without taking risk. On the one end of the risk spectrum, we could leave our money in a bank account earning less than 1% interest a year. Not much risk here, but no returns either.

At the more extreme end of the risk scale is spinning a roulette wheel at the local casino. The risks are huge—meaning the chance of losing our initial ‘investment’ is very high—but so are the potential rewards if luck happens to go our way.

Investors have different risk profiles depending on things like:

Those with more years of investing left ahead of them may wish to take on more investment risk because they have more time to recover if things go wrong. These investors might allocate more of their portfolios to riskier investments such as cryptocurrencies, startup companies and growth stocks.

Those who are lucky enough to have already retired, however, may want to live on a steady income stream from the investments they have already accumulated. Their biggest risk is losing their retirement savings—meaning they are typically more inclined to play it safe. These types of investors often allocate more of their portfolios to interest paying bonds and stable dividend-paying stocks.

More return for a given level of risk

Regardless of our individual risk tolerances, we would all like to own investments which earn a higher return for a given level of risk. This is where the Sharpe ratio comes into play.

The Sharpe ratio measures the return of an investment over its risk (volatility). Before we get to that, let’s first talk a bit about volatility…

A closer look at volatility:

Volatility is the standard way to measure the risk of an investment over a period of time (such as a day, week, month, or year).

The mathematical formula for the Sharpe ratio is as follows:

Let’s now look at each of the two parts that make up this equation:

The excess return of an investment is the difference between its percentage return and the return of a ‘risk-free’ asset. The risk free asset theoretically has no risk. Going back to the example at the start of this post, if an investor held cash in their bank account, they may be able to earn 1% a year on that cash without much risk.

Most finance textbooks use the returns of government-backed bonds such as UK Gilts or US Treasury Bills as the risk-free rate when calculating the Sharpe ratio. Since governments can print money at will to pay investors interest payments, their bonds are widely considered to have approximately zero risk.

To keep things simple for our purposes, we will use 1% as the ‘risk free’ rate of return.

Wikipedia defines standard deviation as “a measure that is used to quantify the amount of variation or dispersion of a set of data values.”

In other words —the higher the standard deviation, the more variation in prices, and the more volatile the asset!

The example in the box below explains how we can easily calculate the standard deviation in Excel:

In this example, we will use Excel to calculate the monthly standard deviations (volatility) during 2017 of two assets that had very different levels of volatility over that time:

To start with, we first enter the prices of bitcoin for the last business day of each month in 2017 into our spreadsheet. Note that we could use weekends and holidays for our prices too as cryptos trade 24/7. But since we will be comparing our results with stocks—which don’t trade on weekends or holidays—we will use business days only. 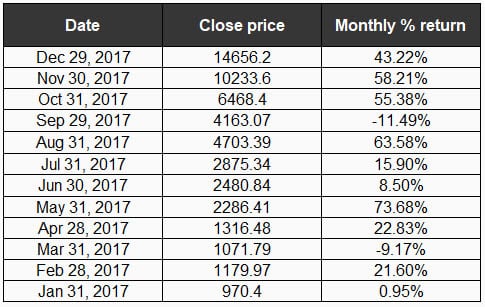 Side note: I obtained the above prices for bitcoin through the ‘historical data’ tab in coinmarketcap.com. This was a copy and paste job, but there are smarter ways to do this such as using a free API to automatically pull prices in from cryptocompare.com. Using an API can be much better if you plan on building sophisticated investment spreadsheets that automatically update each day.

Notice in the table above how the prices of bitcoin changed by large amounts each month in 2017. In other words, the prices were volatile.

But how volatile were they exactly? We can measure the standard deviation of the percentage returns for bitcoin each month to get a good idea…

To calculate the monthly standard deviation of bitcoin in Excel, we use the ‘STDEV’ function. To do this, type “=STDEV” in a blank cell and select the cell range:
​ 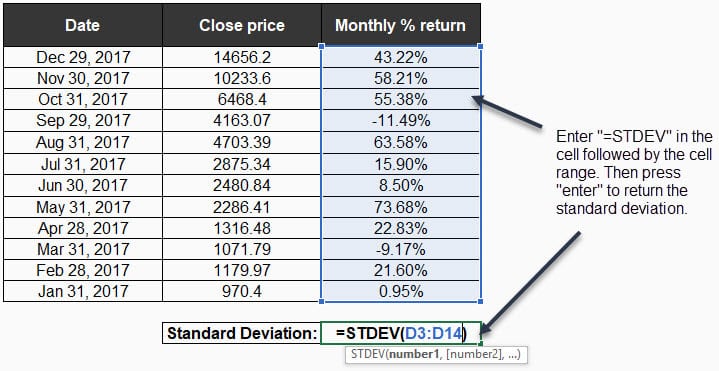 In other words, bitcoin was volatile in 2017. No surprises here.

To drive this point home, let’s now do the same thing for an investment that was far less volatile in 2017—the S&P 500 Index. We can get the “historical prices of the S&P 500 from Yahoo Finance.

As you can see, the monthly returns of the S&P were far less volatile than bitcoin’s were in 2017. Again, no surprises here.

Back to the Sharpe ratio…

The example above tells us that bitcoin was considerably more volatile than the S&P during 2017. Of course, this is something we already knew.

But how did the two investments compare in terms of risk return trade-offs in 2017? In the box below, we will calculate the Sharpe ratios for each of these.

Recall from earlier that the Sharpe ratio is calculated as follows:

We already know the standard deviations of each investment, so we now need to calculate the average % excess returns.

We can easily do this in Excel by subtracting the monthly % risk free return from bitcoin’s monthly return. Note that we are assuming a yearly risk free rate of 1%. However, if we use compounded average returns, then our monthly risk free rate is 0.08%, rather than 1% divided by 12 months.

In other words, 8% returned each month will give us 1% if we compound those returns on top of each other for 12 months. There’s a bit of maths here, but you can download a copy of the Sharpe ratio spreadsheet I used for this example at the end of this post to make things easier. The spreadsheet includes all the formulas.

Now that we have the monthly % excess returns, we can calculate bitcoin’s 2017 Sharpe ratio in excel: 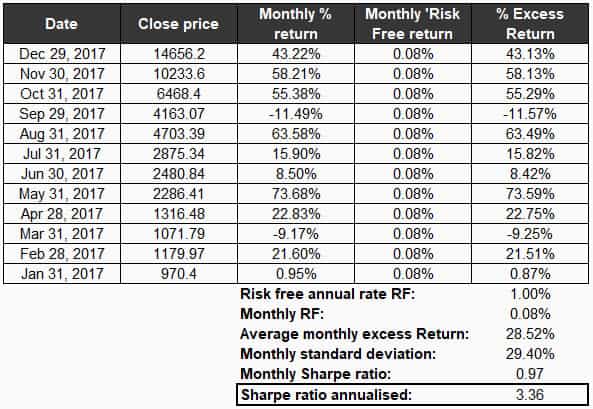 BTC Sharpe ratio for 2017.
The numbers above show a monthly Sharpe ratio of 0.97. However, most analysts will use the annualised Sharpe ratio as their preferred format. To annualise the monthly Sharpe ratio, we don’t multiply it by 12, but rather, by the square root of 12. We do this to stop the effect of positve and negative monthly returns cancelling each other out. Again, this is all in the spreadsheet at the end. 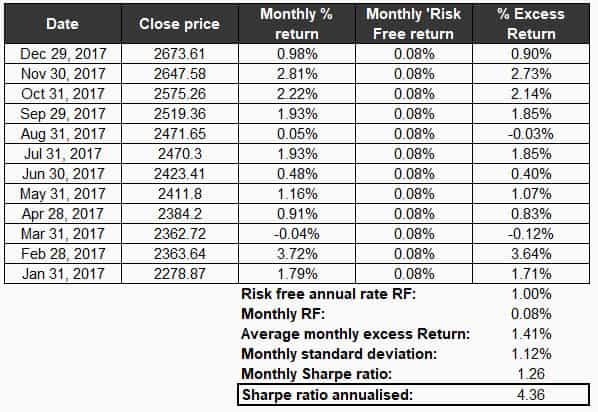 The above table shows that the S&P had a higher Sharpe ratio than bitcoin in 2017. What does this mean? It means that ‘pound for pound’ the S&P performed better than bitcoin on a risk adjusted basis in 2017.

It’s worth noting that a Sharpe ratio of 1 is considered reasonable, 2 is very good, and 3 is exceptional. This means that in 2017, both bitcoin and the S&P were exceptional investments on a risk adjusted basis. The reasons for this are:

It is important to note that these numbers apply to 2017 only, which was an exceptional year for both of these assets. If we were to instead use data from 2008—the year Lehman Brothers collapsed—the S&P would have had a Sharpe ratio of negative 2.46 using the same assumption of a 1% risk free rate.

If we use the returns of the bitcoin bear market in 2014, we get a Sharpe ratio of negative 0.89.


Tell Us Where To Send Your Sharpe Ratio Spreadsheet

Success! Your spreadsheet should be in your inbox. If you don't get it for whatever reason, email me at [email protected]

Jonathan Hobbs, CFA, is an author, entrepreneur and financial blogger. He invests in stocks, mutual funds, startup companies, gold and cryptocurrencies. He believes strongly that nobody can predict the future of financial markets, so he prefers to simplify his approach to investing with basic investment rules and strategies that work well over time.